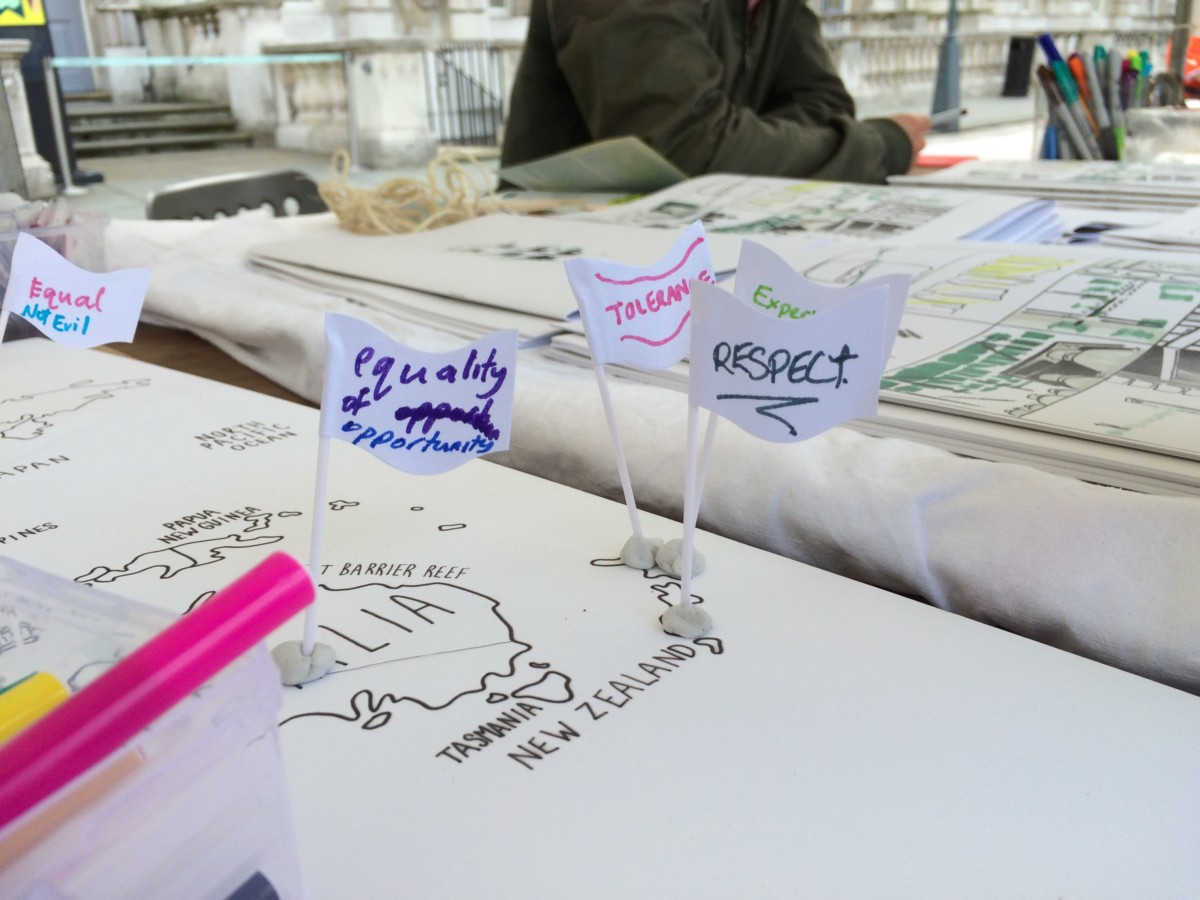 The Prototyping Utopias project created ‘spaces for dreaming’ for local people and organisations in Bow, East London, to share and visualise their visions and ideas for the places where they live, work and play.

Prototyping Utopias set out to test a number of approaches to engaging a cross-section of a community in thinking about the future of their place and to using design to prototype local ideas and solutions.

The Glass-House and the Open University are involved as lead partners in a five-year project, Empowering Design Practices, through which we are working with Bow Church in east London to support them in thinking about how to unlock the potential of their building for wider community use. A call for participation in the AHRC’s Utopia-themed research festival offered a new opportunity to work with Bow Church and other local organisations to engage the community in exploring their broad ideals for great places, and in imagining what the future of Bow might be through a Utopian lens. The project tested a two-stage process of dreaming and prototyping diverse community-led utopias within a particular real-life locality.

Dreaming Utopias
The first of two events organised in Bow, ‘Dreaming Utopias’ was an open day held in and around Bow Church in April 2016, which offered a variety of creative activities and opportunities for people to reflect, talk to one another, interact with artists and create visions of a utopian Bow.

Prototyping Utopias
Following the ‘Dreaming Utopias’ event, we organised a workshop at Bow Arts in May 2016 which created a space for a small group of community members and project partners to ‘prototype’ some of the ideas shared by people at the open day. Participants developed models and presented their ideas on how to translate people’s visions into community-based actions and opportunities, drawing on local relationships, skills and resources. One prototype, ‘Smile Avenue’, brought together the themes of nature, food and community gathering, while a second, ‘Magic Boxes’, explored how to provide public, free and accessible spaces or resources for creative and random interactions.

Utopia Fair
As part of the funding initiative, we were invited to produce an interactive exhibition of the community explorations in Bow that would form part of the Utopia Fair held at Somerset House, 24th-26th June 2016. Our project joined over thirty others at the Fair, bringing together projects involving local community groups, researchers, activists and artists across the UK to explore how utopian ideals can be used to benefit the environmental and social future of our communities.

We set up our stall to inspire visitors through the dreams and visions of the people in Bow who participated in our project, and to create spaces for conversations, for making and for dreaming about a better future for our places. Using one of the prototypes developed at the Prototyping Utopias workshop, the ‘magic box’, we created a pop-up space for making and conversation. From a trunk containing a myriad of arts and crafts materials, people of all ages gathered around to create models and prototypes of their utopian dreams and to talk to each other. This utopia chest was particularly popular with young people, families, and children, and became a vehicle not only for the creation of visual representations of utopias, but also for in-depth discussions and exchanges.

Prototyping Utopias was created and led by The Glass-House Community Led Design and the Open University, in collaboration with Bow Arts, Bow Church, Bromley by Bow Centre, Poplar HARCA and artists Simon Daw and Paul Burgess.

The project created a playful and relaxed environment and a space where there was freedom to explore, share, listen and dream in a way that the usual parameters for consultation and engagement on specific issues, do not generally allow for.

The project was not aimed at directly informing a specific project or service, but it served as a space for project partners to explore the ways in which they engage with and provide opportunities for local people, and how they can use local physical assets to support informal activity and interaction.

A number of the local partners have since built on these activities, exploring ways in which to offer and accommodate some of the ideas that emerged through the project and the types of spaces where such opportunities for interaction, collaboration and inspiration can emerge.

For The Glass-House, it reinforced for us the value of dreaming: to inspire new ideas and help us all to explore how we want to live.

PROTOTYPING UTOPIAS FILM
Filmmaker Emma Crouch was commissioned to create a film that conveys the activities, dreams and reflections of those who took part in the Prototyping Utopias project in April and May 2016. An evocative soundtrack of utopian dreams captured through a participatory sound installation, gives voice to local aspirations and desires and inspires others to think about the future of their own places. The film was screened at Somerset House during the Utopia Fair weekend.

ON THE BLOG
We must be ambitious and dare to dream about the ideal: Dreaming Utopias in Bow
In my dream of utopia: creative spaces for utopian thinking