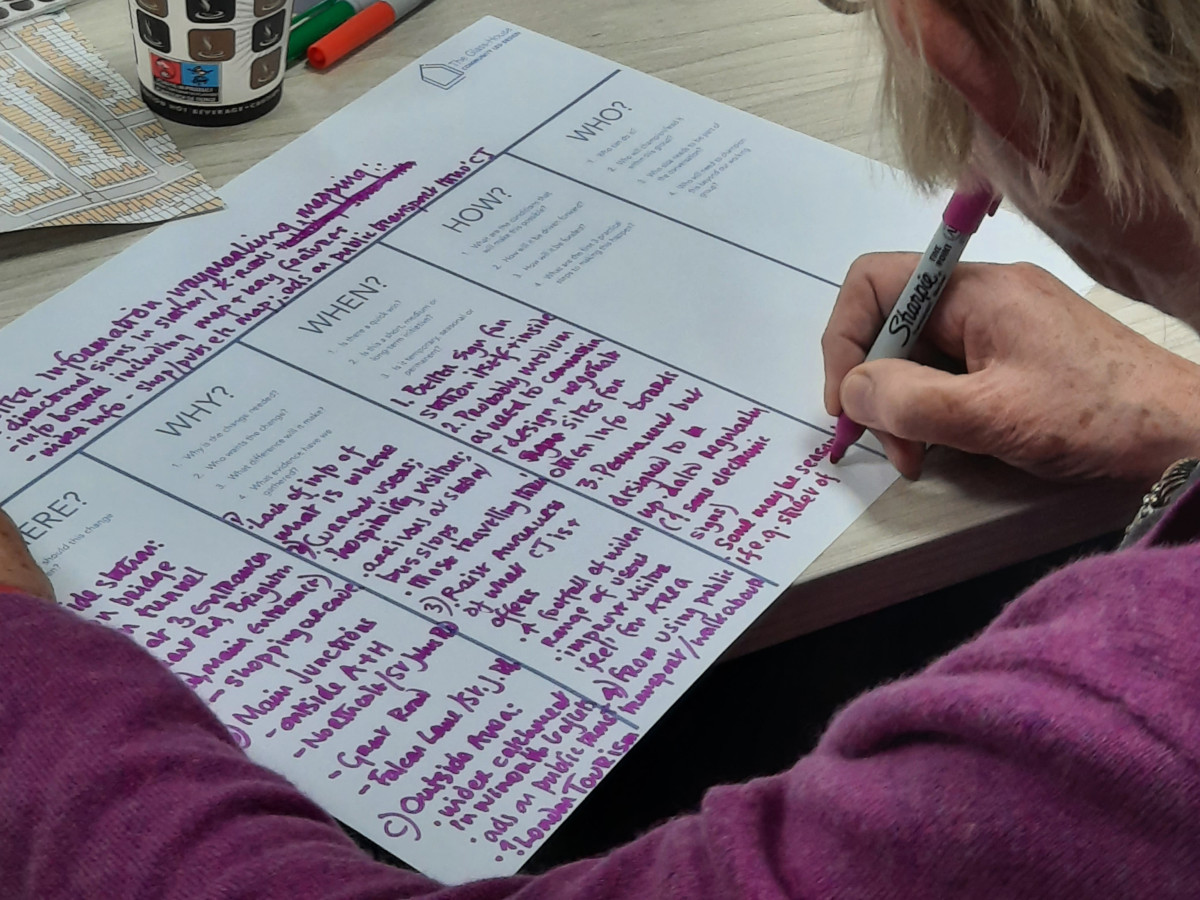 The Glass-House was brought in by The Junction BID and a consortium of partners to help them develop a strategy and action plan for their programme of walkabouts, and to then help them capture and consolidate the group’s learning and ideas for activating change.

The consortium, led by The Junction Business Improvement District (BID) and including a range of community organisations in Battersea, secured funding from the Mayor of London’s High Streets for All Challenge Fund for the initial stage of a project to enhance the environment in Clapham Junction (Battersea) for residents, visitors, businesses, and other organisations. The BID’s ambition is to create resilient high streets that promote local partnerships, ensuring these are safe spaces for people to explore, mobilise, share dialogue and collaborate.

The Glass-House was invited by the consortium to support the group in the early phases of their project, which centred around a series of walkabouts to engage local people in conversation about their area. The project aimed to build the foundations for longer term initiatives alongside developing a network of community-led and cross-sector collaboration which builds on the rich local history of social action amongst community and business initiatives alike.

Kicking off the engagement process

The first workshop with The Junction consortium was a fast-paced, interactive space which explored the possibilities of unearthing and mobilising people within the community to help drive change. We asked the workshop participants to consider the potential of locally-led walkabouts as both a method of research to explore the opportunities and challenges facing The Junction, and as a tool to activate wider engagement with the diverse communities within the area.

The workshop used key urban design principles and features to offer a loose framework for identifying and testing themes to explore through the programme of walkabouts being  planned. A number of themes emerged, such as those focusing on public and green space, identity and wayfinding. A quick round of asset-mapping with those present revealed that there was no shortage of ideas and assets both within the working group and their wider community network, which could help kick-start conversations and be used throughout the project.

Building on the themes that emerged in the initial workshop, the consortium partners planned and delivered a series of walkabouts and other engagement activities to help them extend their  community-led examination of The Junction.

Through the walkabouts, led by consortium partners and other local residents, the working group created moments for connection and discovery as they led participants around planned routes of The Junction. By inviting participants to share, listen and reflect on their experiences of the spaces within The Junction, the working group were able to glean valuable information to inform the next stage of the project. The walkabouts involved a total of 90 diverse participants from The Junction, including representation from various local community groups.

Our second workshop created a space for the working group to share the findings, discoveries and stories that had emerged from the engagement activities, identifying key priorities in order to develop ideas for potential future projects.

Through a series of steps that began with a rich conversation about the various walkabouts, the group worked together to organise the information and views collected into themes including; identity, wayfinding, mobility and accessibility, safety, infrastructure and public space. They also identified key areas within the junction that had been identified by people as problem spots. This helped them to prioritise both thematic and physical areas of focus within The Junction, and to explore how both small and large-scale changes might improve the area.

Following these discussions, the group then used an action planning framework to bring the key recommendations into focus, consider how to activate change, and with whom, and to identify potential next steps for the core working group.

Emerging Themes for the Future of The Junction

The Junction: Placemaking and Wayfinding Project was the start of a much bigger conversation and demonstrated that there is much to be learned about a place through creating opportunities for dialogue and collaboration. The findings from this first phase of strategic planning and engagement have created a solid foundation of data and voices gathered through engagement with members of the community, and will hopefully aid the group’s journey in strengthening their priorities for action and developing a series of propositional initiatives.

The activities carried out over a two-month period produced a long list of recommendations, some specifically targeted to particular places and actors in the placemaking landscape, others much more strategic; some quick wins and others requiring long-term vision and planning.

This first phase also revealed the huge potential to activate a community that boasts a wide range of people, organisations and businesses, with a number of local initiatives already tackling social issues through various programmes and projects. However, it also became clear that some kind of infrastructure for collaboration around placemaking could help bring the diverse players, programmes and initiatives together in a more cohesive conversation about the area and how it is working. Clapham Junction brings together a range of quite distinct neighbourhoods and diverse communities, and placemaking could offer a useful approach not only to improving the physical aspects of the area (from an urban design and experiential perspective) but also to help forge local connections and collaborations.

It was clear that this work was only the start of a much bigger conversation, but the initial research carried out and gathered through the walkabouts, workshops and associated report, lays a solid foundation on which to build, as well as becoming a useful tool to invite more people and organisations into the movement for change.

Collaboration with The Junction continues

While our work with The Junction BID and partners has come to a close on this initial stage of The Junction: Placemaking and Wayfinding Project, it is not the end of the journey for them, or for our collaboration. We have connected the Junction BID group with students from the UCL Bartlett School of Planning to help drive some of their priorities forward – providing a space for reciprocity between the students working on a live project and developing skills ‘on the ground’.

This project journey will also be complemented by an upcoming research project, Cross Pollination: growing cross-sector design collaboration in placemaking, which The Glass-House is leading alongside our strategic partners The Open University. The aim of this project is to grow capacity for cross sector collaboration in design and placemaking, focusing on scaling up the possibilities for collaboration and providing spaces that can enable and empower placemaking actors. This would provide a means to connect projects across the Junction between groups, mobilise and unearth assets and create champions to drive different project initiatives forward within the Junction.

While these additional projects present themselves as separate ‘arms’ they are in fact part of the same journey and present an opportunity to energise and complement each other as the project as a whole moves forward. The combination of these projects and the ongoing work of the consortium partners (as well as their ongoing collaboration with both their local council and the Greater London Authority) creates  potential for the group to evolve how they create space for experimentation and prototyping for their initiatives, as well as how they might build an infrastructure of community-led action and cross-sector collaboration.

The Junction: Placemaking and Wayfinding Report

Explore the documentation of the first project phase through this report which captures the discoveries and recommendations that emerged.

You can find our earlier blog post about the Workshops with Junction BID groups and consortium partners here.

To find more about the Junction BID please follow this link here. To find out more about previous Cross Pollination research, please find a link here.