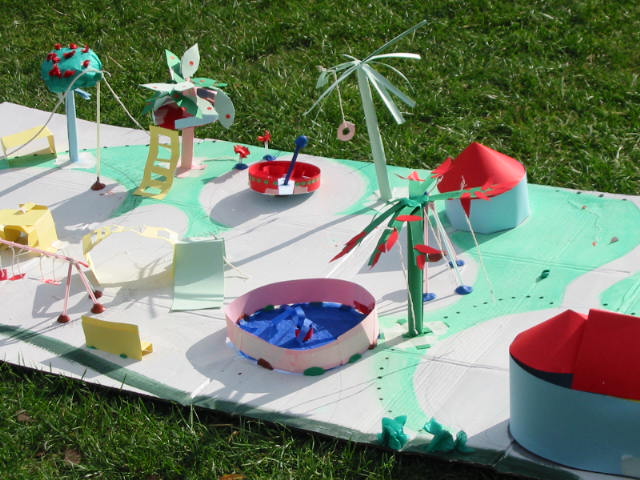 We supported Myatt’s Fields Park Project Group to undertake a series of three design workshops with children and young people who use the park or who live in the area, to develop their vision for a new proposed playground.

In 2000, a group of parents decided that they wanted to improve their local park. They got together with other local residents and formed a partnership with the London Borough of Lambeth. In 2002, the group was constituted as the Myatt’s Fields Park Project Group and in 2005, they became a registered charity. The group’s purpose was to regenerate Myatt’s Fields Park, and ensure that the local residents would have their say in the design and refurbishment of the park.

The regeneration included the renovation of historic features such as the band stand and roundhouse, new sports facilities, a playground and a new One O’Clock Club to support the children and their parents, as well as offering a space for the rest of the community. As a group they wanted to attract more visitors, especially from the many estates around the park.

In 2003, the group was awarded £37,000 by Lambeth Council Neighborhood Renewal Fund, spent preparing a successful application to the Heritage Lottery Fund. Who then awarded the park £45,000 to support the application for the Stage One bid. Stage Two approval was awarded in December 2006.

In June 2005, some members of MFPP Group attended a Glass-House Buildings by Design Course at The Trafford Hall. Through the task of developing a proposal for the One O’Clock Club, they developed confidence in articulating their ideas and presenting them clearly to project stakeholders.

To contribute to community engagement, activities and resources, The Glass-House supported a series of creative, hands on,  engagement events that took place in the park, to continue the development of the adjoining playground. This involved both local school children and residents from the local community. Playful knowledge exchange activities took the form of study tours, treasure hunts, decorating favoured park equipment and model making at various scales. A newsletter was created to celebrate the existing legacy of Myatt’s Field Park.

The Buildings by Design course gave the group the opportunity to dedicate time to the project, and allowed them to establish some of the main principles of the brief,  for example, having a clear and visible connection between the inside and out. As well as drawing a material pallet from the park itself, it was decided that the building should include lots of wood and natural materials. Ideas surrounding the children’s park was inspired by the Study Tour of Clapham Common, which led to the children deciding on dedicated areas and zoning for different types of play.

This project showcases the community’s aspirations and confidence built through the design and engagement activities.The Heritage Lottery Fund was impressed by the group’s consultation skills both with the community and professional organisations.

Several members of the community who had no previous involvement in the regeneration of the park were also engaged, resulting in one member joining the MFPP Group. The group said:

‘This has been extremely helpful in getting young people on board, and also very helpful in carrying out effective consultation with children and local adults about the design of the children’s building and playground.’

Engagement with the community shifted the tone of the conversation around the project from suspicion by some sectors to general acceptance and delight. The engagement work was highly  influential in terms of winning support for the project, and some of the biggest critics became the project’s biggest advocates. Myatt’s Field Park underwent a £3 million pound regeneration, which was completed in 2010.

Following the completion of the Myatt Park regeneration, the heritage buildings were refurbished, a new cafe and One O’Clock Club was opened. Reinstating the greenhouse allowed for outdoor beds to be created  for a project that connects inner-city Londers with food growing.

By getting the community motivated to support and engage with the park, the community turned a neglected heritage site into a flourishing community asset.

The Myatt’s Field Park project Group are still a registered charity and continue to work closely with the community, providing engaging activities to further strengthen the bonds between residents of the surrounding park. The park remains firmly at the heart of Vassall Ward, and has made their vision of attracting the community into the park a reality. The group continued to engage with the local community through a range of activities, meetings and publications.

Tips and advice from the Myatt’s Park group: