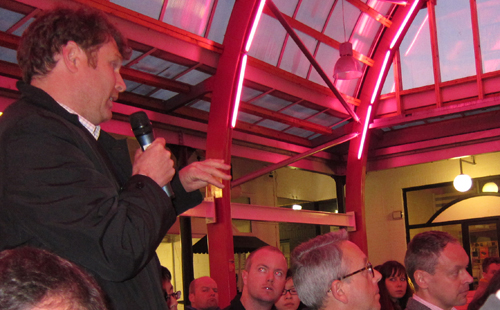 Home / Our work / Supporting dialogue / Putting People in their Place

The Glass-House Debate Series 2012/13, Putting People in their Place, supported discussion around the UK on the relationship between people, place and value. What emerged was the importance of putting core values at the heart of our places.

Our national Debate Series, Putting People in their Place, set out to explore the interaction of people, place and value in the way we shape our places. Bringing together designers, developers, local government, community activists, academic, students and other voices in four cities and through social media, we wanted to gather a range of perspectives and to provoke an open and honest debate.

How can great places create value for local people?
In Glasgow, the Chair architect Kevin Murray and speakers Christopher Lowe (Love MIlton), Brian Evans (Gillespies) and Christopher Breslin (ISIS Regeneration) shared their views on the qualities of places that support people to live well and create beauty and interest. Christopher Rowe brought us the incredibly powerful message that, “If crap places kill people, then great places bring life, affirm life and reinforce life”. Simply put, the intrinsic value of a place lies in how well it supports our quality of life.

What value do local people bring to placemaking?
In Leeds, our Chair Cllr. Josef Ransley (Kirdford Neighbourhood Plan) and speakers Peter McGurn (Goodwin Development Trust), Roy Donson (Barratt Developments lc.) and John Worthington (DEGW) provoked a lively discussion on the role of involving communities in change. At a moment in which powers for communities in planning were coming into effect through the Localism Act, many members of the audience questioned whether policy was enough to empower people, and asked where the balance of power lay in our current value system which many felt was driven by finance.

Does involving local people in placemaking make good business sense?
This theme emerged again in Liverpool, where Chair Pam Alexander (Crest Nicholson) and speakers Guy Butler (Grosvenor) Iona Horsburgh (FACT)  and Andrew Teage (BDP) A member of the audience who works in the construction industry asked, “Shouldn’t me build everything as if we were building it for someone we love?” Others made the the point that a place only starts to live, when we pour our love into it.

People, place and value: the golden triangle?
In London, we asked Chair Tom Dyckhoff, writer and broadcaster, and the three debate Chairs (along with Glass-House Chief Executive, Sophia) to reflect on the discussions across the three debates. We talked much of the strong feeling of frustration expressed by our audiences at the systems and processes that currently guide development and regeneration. One young student asked the older generations in the room, “How have you let it come to this?”.

The overarching message that came through in this series was that people must remain at the heart of our places. If we leave them, and their values, out of our thinking and our systems for placemaking, the value of our places becomes merely a number.

The themes and powerful messages that emerges through the Debate Series have stayed with and inspired The Glass-House and many others who engaged with it.

New collaborations emerged between The Glass-House and both individuals and organisations involved in the Debates. This included sponsorship from Grosvenor for the 2013/14 series who were keen to stay involved in a national conversation that brought together such a diverse range of voices.

To bring together and share the vast array of voices in these debates, shared through provocations, think pieces, audience contributions and on social media, we produced a small publication, People, Place and Values: Reflections on The Glass-House Debate Series 2012/13.

‘Crap places kill people’: How local involvement in placemaking aids health and wellbeing (Article for the Town and Country Planning Journal by The Glass-House)

How can great places create value for local people?
What value do local people bring to placemaking?
Does involving local people in placemaking make business sense?
People, place and value: the golden triangle?