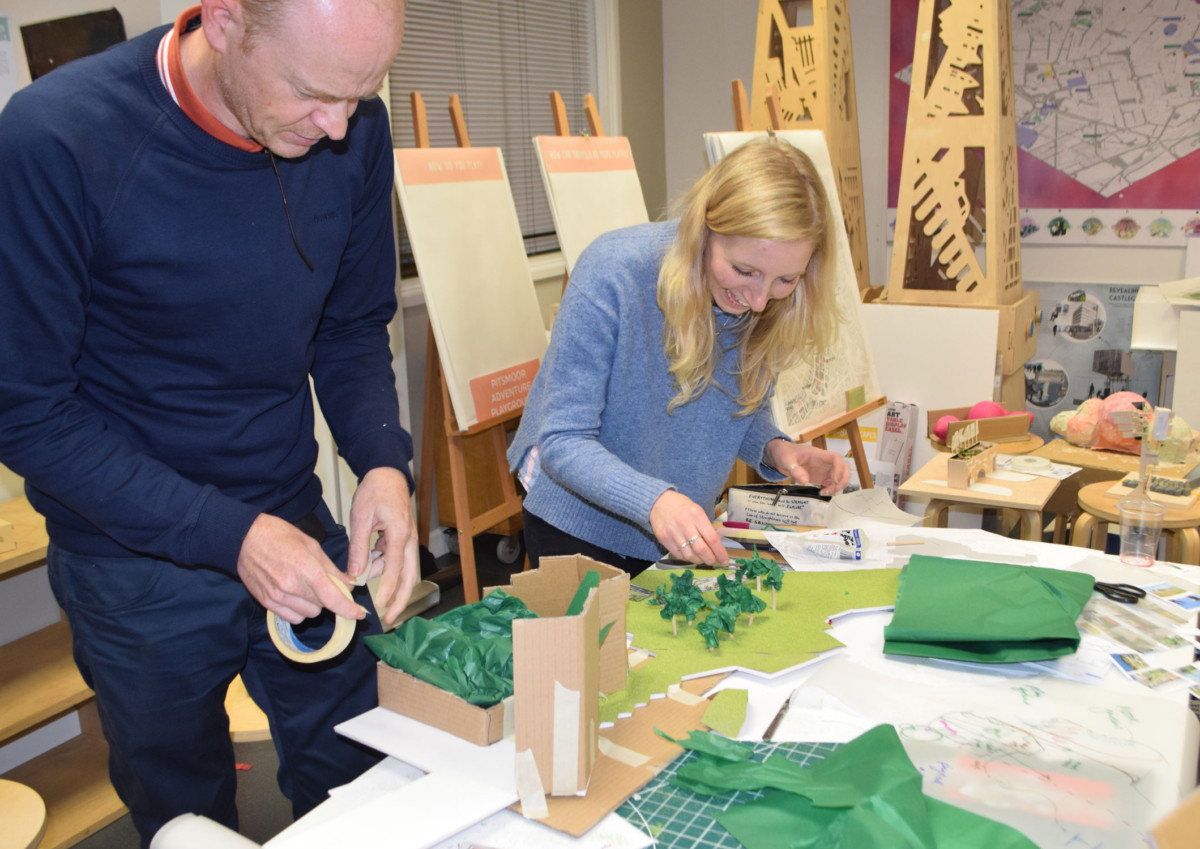 The WE design event series explored ways we can work together in a neutral space to implement change and develop ideas which challenge traditional ideas of placemaking.

This series emerged from a desire to use these events as a way to test themes which are grounded in local contexts but have wider relevance. We wanted to explore what the language of community-led and community engaged design, which is often used as part of the narrative of development and regeneration, actually means in practice for people involved in the process.

Beyond Buzzwords: the language of collaborative design
London, 17 October 2018 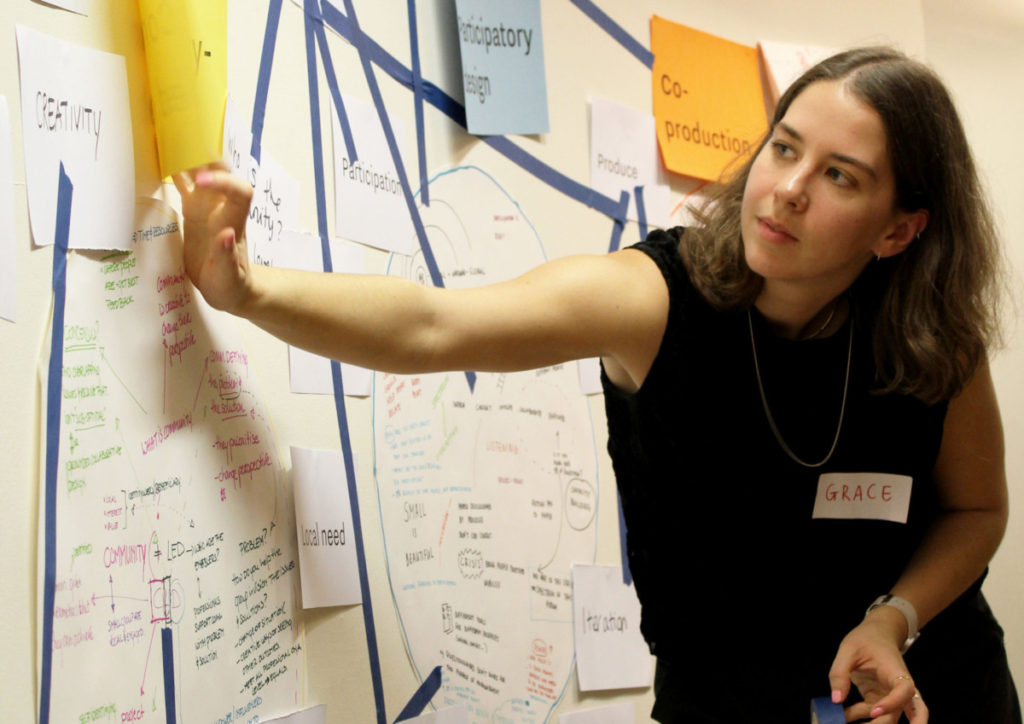 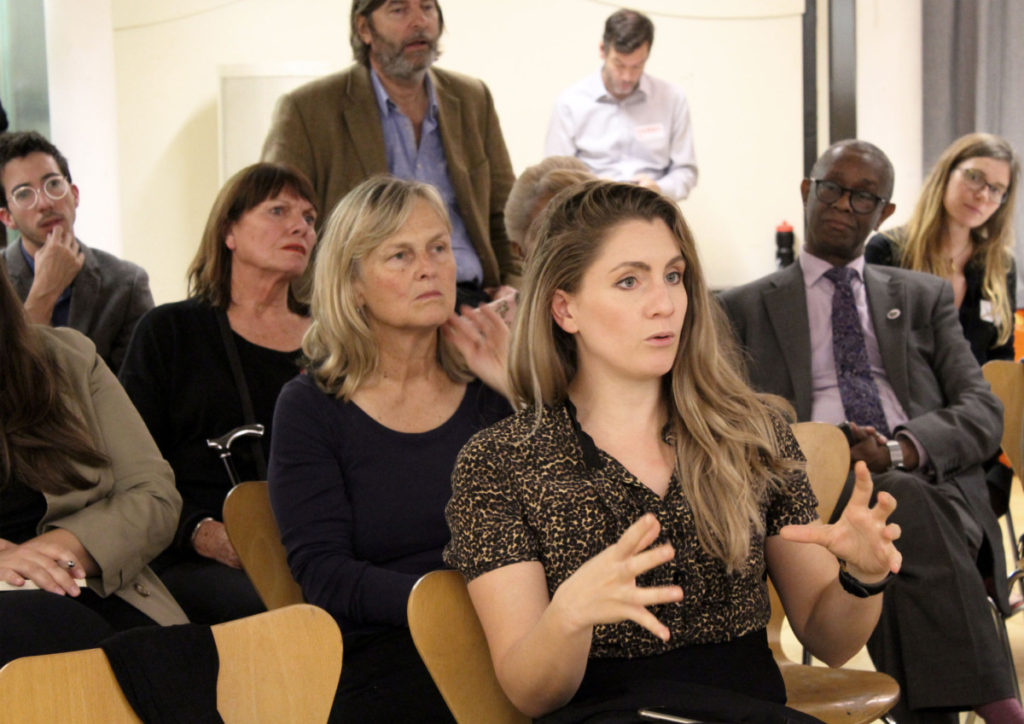 For the inaugural event of the series in collaboration with the Design Group at The Open University, we explored the terminology surrounding the various definitions of collaborative design language. We invited participants to work in groups to brainstorm what they believe is meant by terms like co-design, community-led design, participatory design and co-production. During the discussion that followed, which was live-mapped onto the wall, it was clear that many words have vastly different connotations depending on your standpoint and experience of the process. Themes of power, agency and distrust of overly academic or technical, exclusionary design language were identified as barriers to community participation. Whilst the definitions were not necessarily re-written during the evening, what was clear was the need to set up mutually agreed terminology at the initiation of the project, as well as a general awareness of the significance of design language. 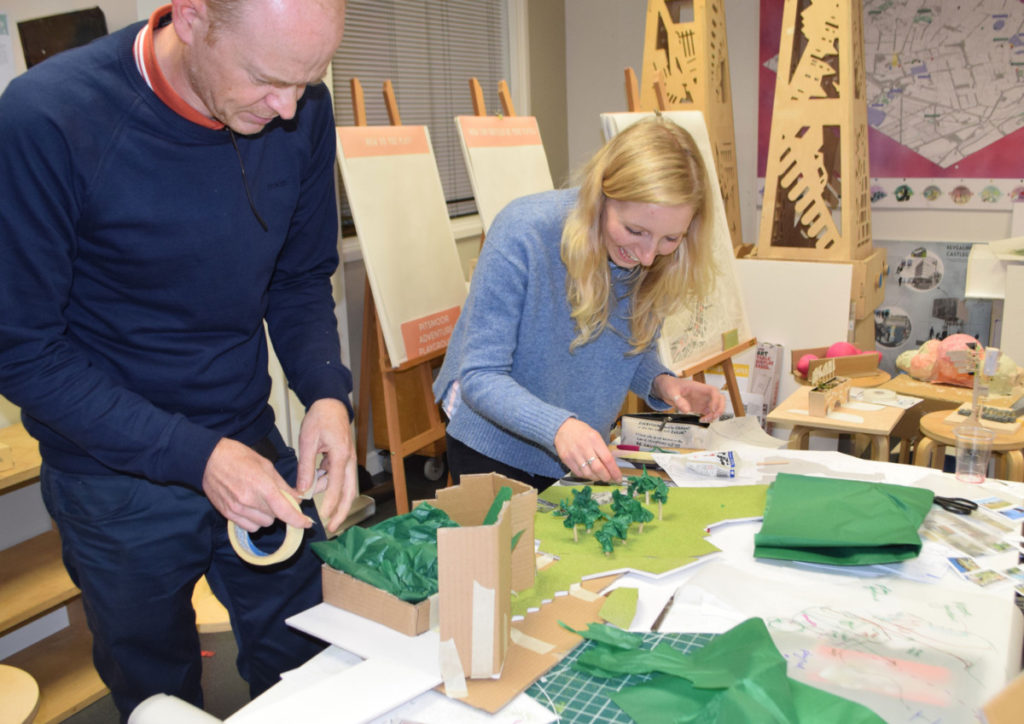 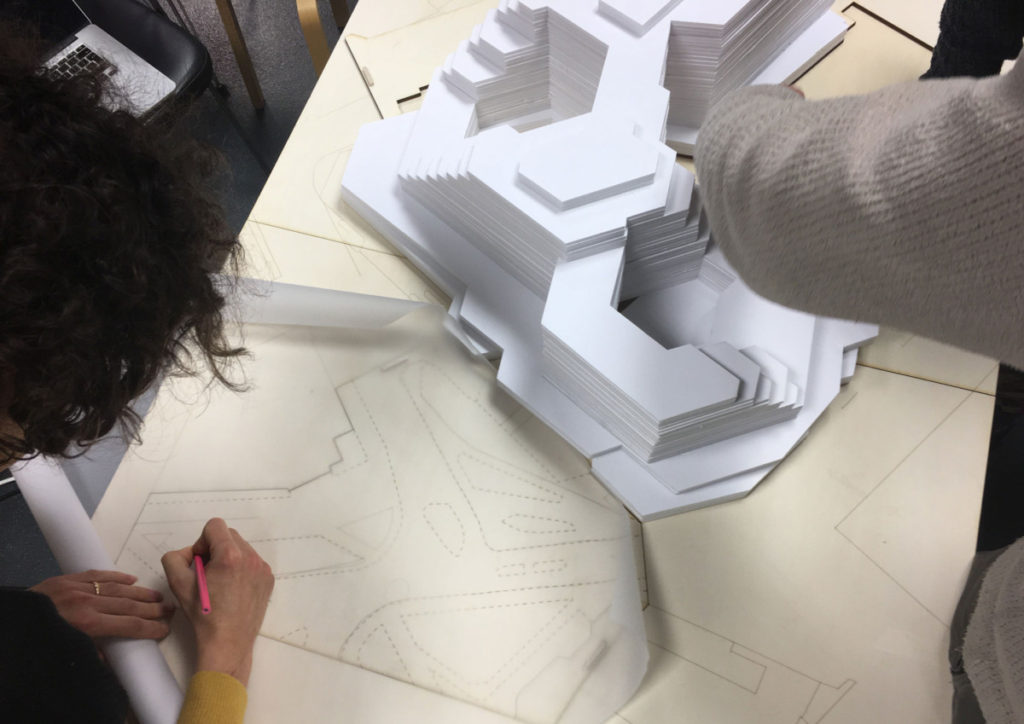 In Sheffield, we encouraged participants to think outside the box, working together to create bold, creative proposals for the Moorfoot building and the surrounding public space using drawing and model making. The huge building that was the focal point for our event seemed to polarise opinion due to its form and location obstructing a key route through the city, leading to some interesting conversations about the merits of preservation, reconfiguration and demolition. Nightfall saw us heading outside for guerilla lighting, a fun experiment using torches to investigate the impact small interventions can have on the feel of a place. We wrapped up with a discussion about how to use the outcomes of sessions like this to inform policy and enact local change. The event was a collaboration with Live Works, an urban room run by Sheffield University’s School of Architecture. 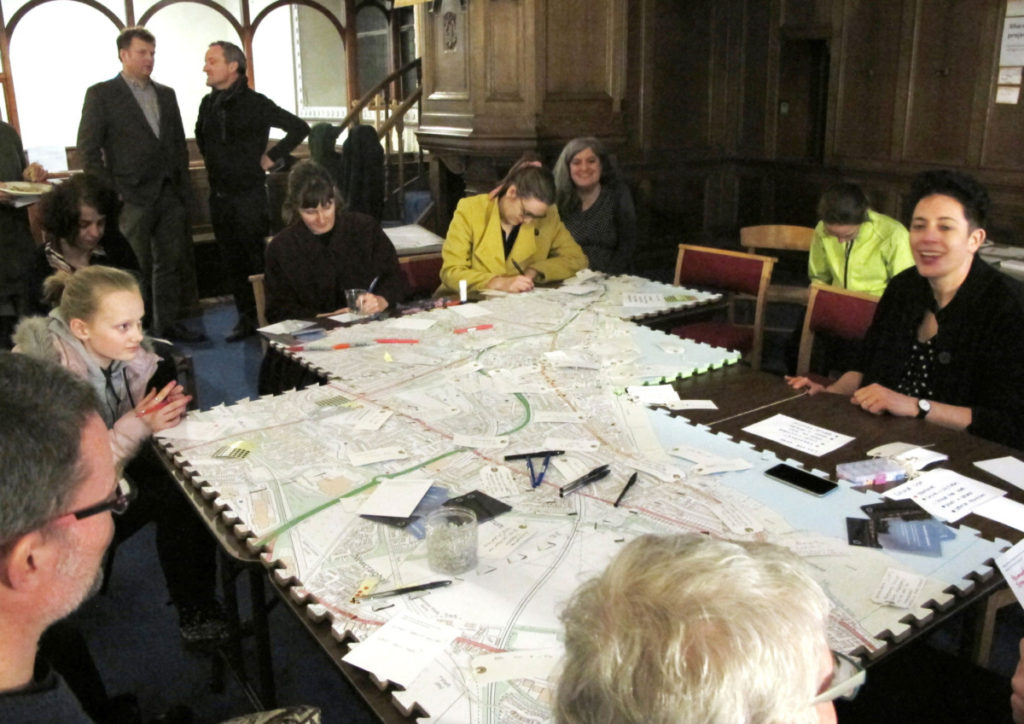 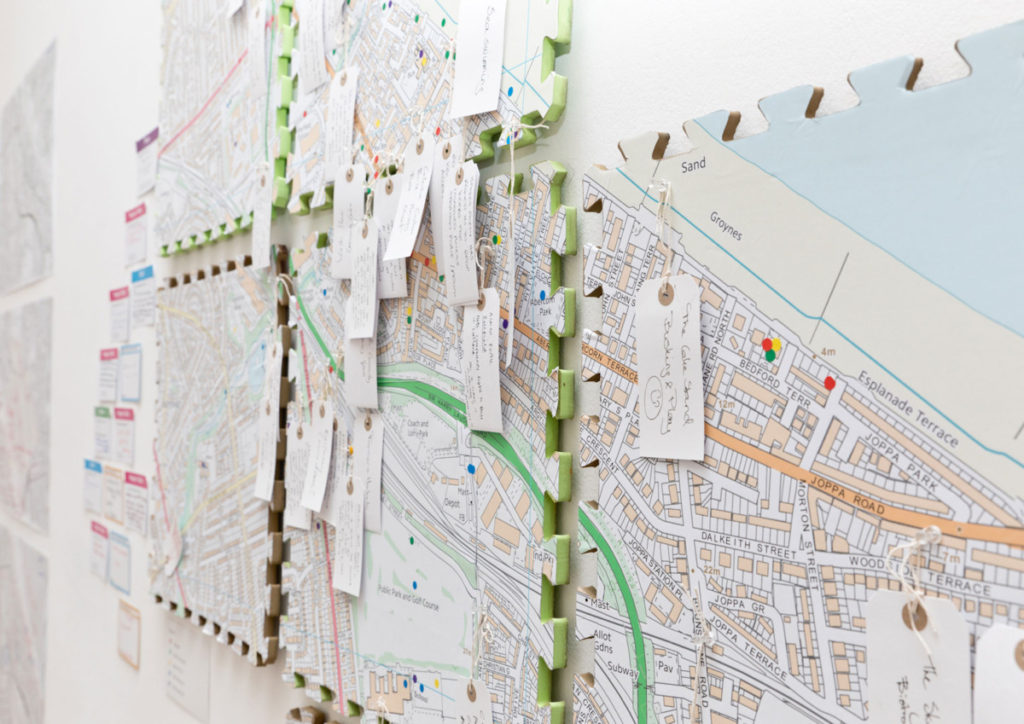 We held our third event in Portobello, a coastal suburb to the North of Edinburgh in Scotland in collaboration with Architecture and Design Scotland. There was lots to discuss as we mapped local amenities, voted for special places and collected opinions during the afternoon drop-in and evening workshop. We spoke about the need to create positive spaces for celebrating places, rather than only coming together to oppose something. Participants spoke passionately about their love for the area, and the uniqueness of the promenade and coastal areas. During an asset mapping activity, we found that several attendees were working on related shoreline projects and were keen to connect with each other. The event highlighted the importance of a collaborative economy, the impact that pooling resources can have, and the need to include people of all ages in conversations about placemaking. 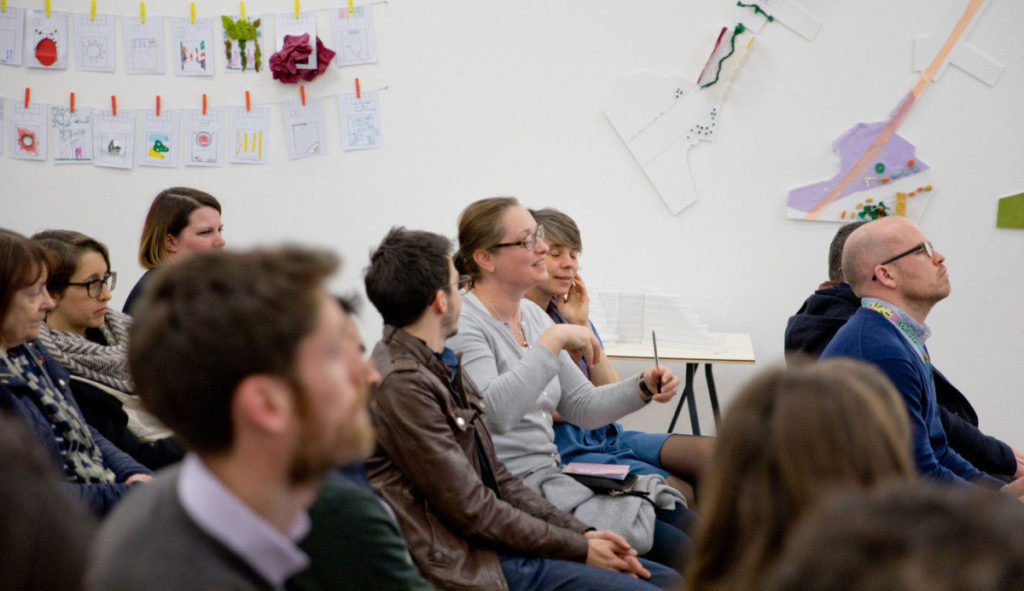 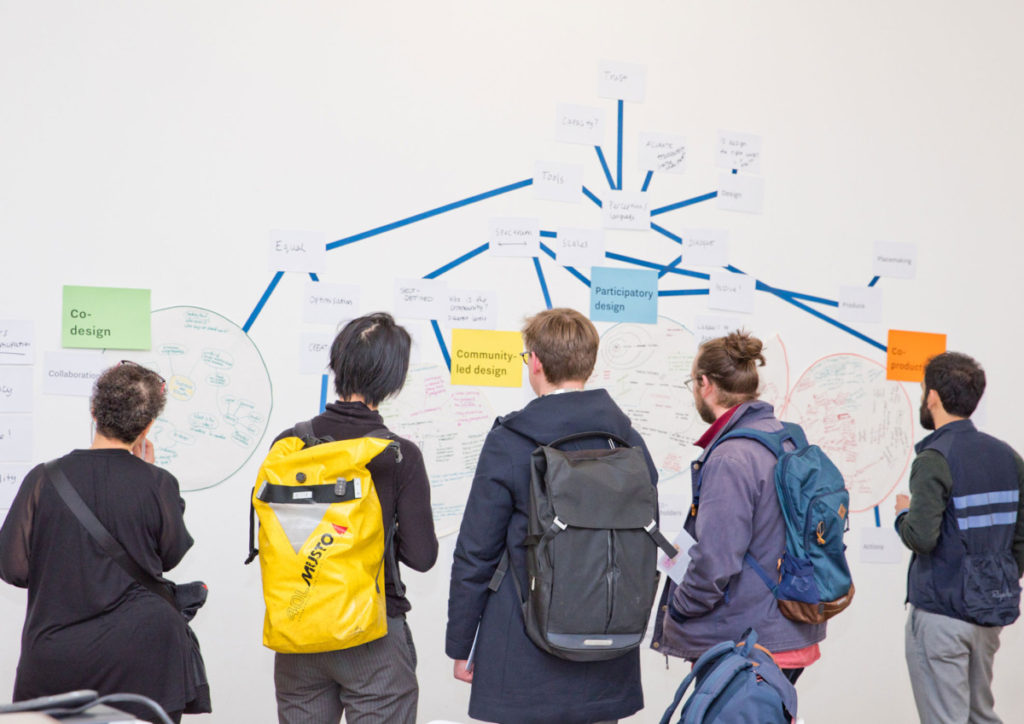 Back in London, our round-up event took on a new form for The Glass-House as we held an exhibition of the objects, models, drawings and activities that had been produced throughout the series. Held at Raven Row gallery in London, we shared the processes and ideas we had explored, as well as inviting participants to respond to the question, ‘What can we do to shift policy, culture and practice towards more collaborative design?’. During the discussion, Sophia, who was chairing the event, drew on the knowledge and expertise of people in the room, who noted what seems to be an industry shift in terms of acknowledging the importance of collaborative and community-led design.

WE design was initiated on the basis of long established Glass-House thinking, but with a more experimental, proactive slant on the usual debate series. We wanted to test different ways to collect data and facilitate people working collaboratively within the event format to collect outcomes that are interesting in their own right, but also to see which might be most effective to use again in the future.

We found that the model used at Beyond Buzzwords, in which participants worked separately to collectively explore one element of the topic before coming back together for a group conversation was especially successful.

This series produced a lot of physical outputs, which were a valuable record of what had occurred, as well as allowing participants to be creative and explore a new side to their places. It also highlighted the need to implement ways to share this information after it had been produced, both as a record of the event but also as a tool to implement as part of future discussions.

Participant and partner views on the events:

“I will question concepts more, and seek broader views before acting.”

“What struck me was the productive nature of listening: our group’s best ideas came from the storytelling of my team-mates.”

“What I valued most was [the event] opening up the conversation and connecting different groups and organisations.”

London
Redefining Our Collaborative Language at Beyond Buzzwords
by Myra Stuart

Watch a film about the event

London
Mobilising Change: a Space for Reflection and Sharing
by Sophia de Sousa