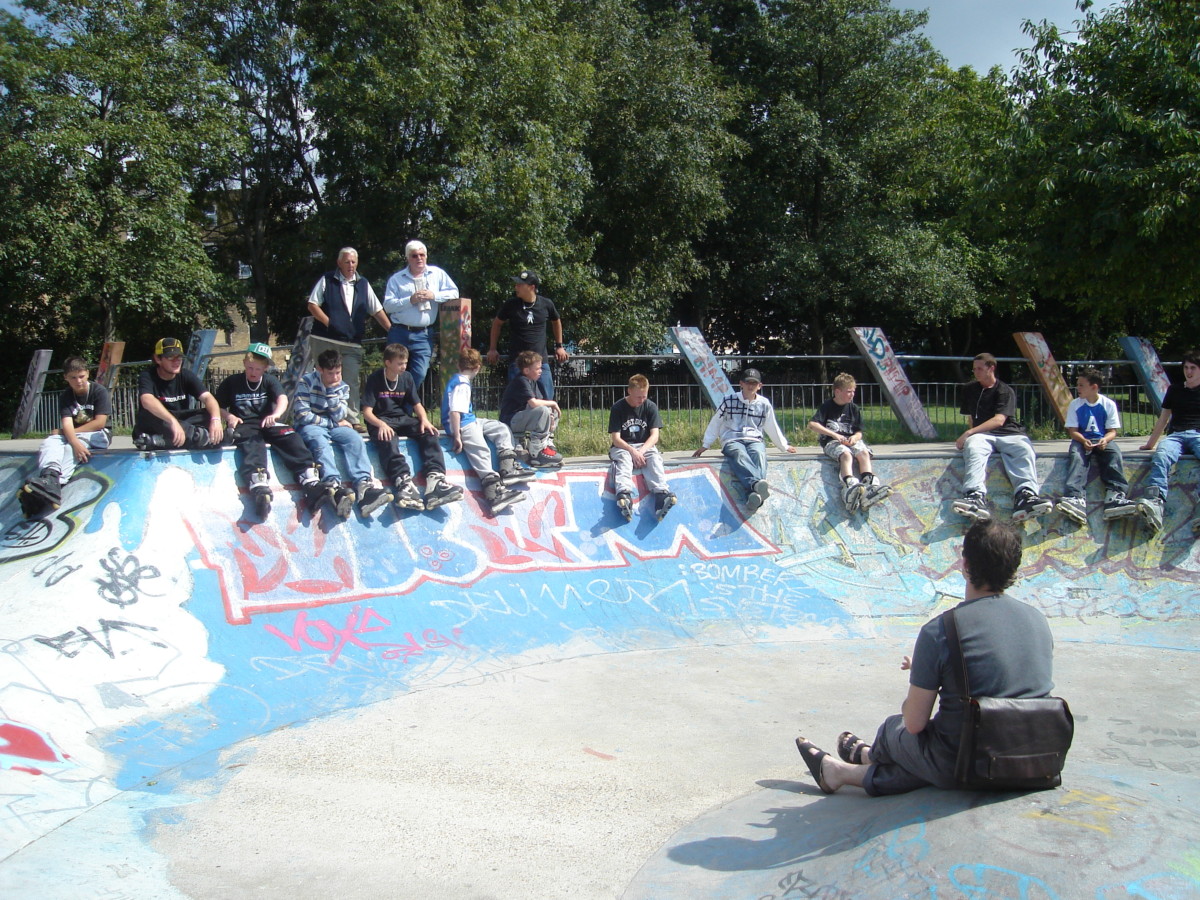 The Glass-House worked with a group of young people in Ludgershall to explore how they could champion and inform the provision of a new skatepark in their local area.

Facing a chronic shortage of outdoor activity spaces for young people, three boys from Ludgershall, a town in Wiltshire, created a petition for a new skatepark in their local area. The proposed skatepark was seen by many as a balm for the growing issues surrounding anti-social behaviour within the area, providing a free-to-access, outdoor facility which promoted exercise and gave young people a space to call their own.

Amassing over 70 signatures from other young people in the town, the group attended The Glass-House’s Young Spacemakers Design Training in the summer of 2007 and quickly established themselves as a ‘The Ludgershall Skate Park Committee’ to oversee the establishment of their skatepark.

This Young Spacemakers was a 3-day residential training programme held at Trafford Hall, the home of the National Communities Resource Centre in Chester. The training brought together three groups of young people, accompanied by adult group leaders, actively involved in place-based initiatives in their areas. The course was a hands-on interactive space to introduce young people to the principles and vocabulary of design, to help build confidence in articulating their ideas about the spaces they were working on, and to experiment with design through a number of design challenges. The training was led by practicing design professionals working alongside Glass-House staff.

Hoping to widen their experience and develop their design skills, as well as their understanding of different types of skating arenas, the group subsequently approached The Glass-House for more support. We created and hosted a study tour of skate parks across London to help them explore both public space in general terms and to look specifically at other spaces where people skate.

Our study tours provide an opportunity for community members to get inspired by the potential of design, to give them ideas for their own community-led projects and to link them to other individuals who have relatable experiences. The London skatepark study tour saw the participants visit parks across the city, most notably the Undercroft skatepark at the Southbank Centre, often considered the home of British skateboarding. Skaters have been appropriating the covered area as an informal skateboarding, BMXing and street art space since the 1970’s, and it proved to be a space of great inspiration for our young study tour participants, despite it not having been originally designed as a skatepark.

The Glass-House Design Training and study tour gave the young people space and time to explore the qualities of the space they wanted to achieve, and to learn from stepping outside their environment to explore how others had achieved similar goals.

By valuing everyone’s innate knowledge and lived experience of their home, neighbourhood, town or city, the group were able to build their confidence to engage with their local council on this issue.

The group worked in collaboration with the council to plan equipment and layout of the park, but unfortunately in 2010 the permit was revoked for the skatepark due to unresolved lease issues with the Ministry of Defence.

Frustrated but not finished, the group continued to work and push for the skate part as a vital outdoor space for young people. Eventually, on April 10th 2012, the proposal was granted final approval and a work order was issued to begin the installation of the two half pipes, ramp and glide bar into the park. The park was completed later that year, and remains a key outdoor space for the young people of Ludgershall.

Through the time spent at the Young Spacemakers Design Training, the Ludgershall Skate Park Committee were able to develop their design vocabulary and ability to articulate their vision for the future of their skatepark as well as the confidence to fight for the creation of a new dedicated space in their town for skateboarding.

The study tour created a valuable opportunity to step outside their familiar surroundings and to be inspired and provoked by other places, as well as give them useful examples to point to when making their case. This helped them articulate both what they wanted and didn’t want from their space. Both the design training and study tour were opportunities to build their shared ideas and confidence as a project team.

Owen White, a council chairman for Ludgershall, said: “The children have worked very hard at it and they liaised with us well. They’ve been quite sensible and it’s nice to deal with kids that appreciate what they’ve achieved and what we have done to help them.”

This project highlights the importance of youth leadership within local areas, and has further highlighted the value of working with young people to foster their creative talents. The group have seen the positive impact of engaging with their local Council and taking part in a democratic process, resulting in them working together to provide further amenities for their local community.

More about the group and their journey:

A guide to the Ludgershall Skate Park.

Ludgershall youngsters to get skatepark article, and an article detailing the skatepark grant.

Some years later we went back to work with another group from the Tidworth area, Tidworth Mums, through the Unearth Hidden Assets research project. The end of project booklet can be found here, and a more specific Tidworth Mums: A Case for Soft Play Resource Pack is also available.

Explore our other projects with young people:

Union Chapel Heritage Workshop: Explore one of our more recent youth engagement workshops, where we worked with Union Chapel to deliver a hybrid workshop completely remotely. Our in-house blog is available to read, or you could explore the report showcasing the workshop experience and range of hybrid resources developed as part of the project.

Are We Designing Young People Out of Public Space?